All of the historical sites are open all year

Sligo’s Archaeological and mythological heritage is incredibly rich, the landscape is peppered with ancient monuments stretching back more than 5,000 years.  It is believed the first settlers to Ireland came into the Northwest and the ancient burial sites lay testament to this.  Carrowmore megalithic tombs even pre-date the pyramids….here is a taste of the history you can make come alive! 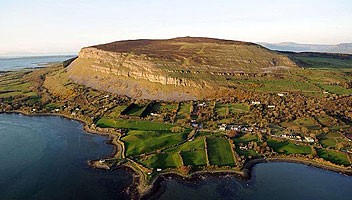 Maeves Cairn on the top of Knocknarea – Overlooking Carrowmore Megalithic cemetary on the summit of knocknarea is this huge flat topped cairn called ‘Miosgan Meadhbha’ it is 55m in diameter and 10m high.  It is the resting place of the last high queen of Connacht or the ‘Iron Queen’ as she was known.  Her legend is most famous in the stories of Cú Culainn and particularly in the legend of the Táin Bó Cuailgne (story of brown bull of connacht).  A truly magnificent architectural, mythological and historical monument.

Archaeology and Heritage around Sligo

Carrowmore Megalithic Cemetary and Heapstown Cairn
This is the largest cemetary of megalithic tombs in Ireland.  Shadowed under Knocknarea this is a wonderous example of early Irish settlers – over 60 tombs are recorded and all of which pre-date the pyramids of Egypt.  Heapstown Cairn is one of the only not excavated but is considered part of the historical makeup of the Carrowmore Coplex. 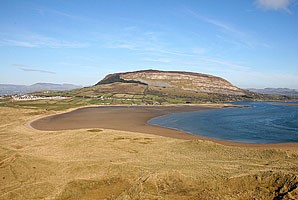 Ballymote Castle
Remains of an Anglo-Norman Castle built in 1300AD the home of Richard de Burgo ‘the red earl of Ulster’.
Carrowkeel
Located in the beautiful enclave of the Bricklieve Mountains, this grouping of 22 cairns stretches west to the Keshcorran Mountain which is capped with a large cairn.  These burial chambers date from 3800BC
CreevyKeel Court Tomb
This is one of the best examples of a court tomb in Ireland, consists of a long, trapeze shaped cairn enclosing an oval court.  4000BC makes it one of the worlds oldest monument
Drumcliff Church, Round tower and High Cross (Burial site also of WB Yeats)
This monastery was founded by St Colmcille in 574AD and the cross dates from about the 10th century… this site also boasts a cafe and interpretive centre which is a fun way of learning of the history of the region!
Knocknashee
The ‘Hill of the Fairies’ as is known was used in the Disney Film ‘Darby O Gill and the Little People’ it is located near Tubbercurry on a spectacular limestone table-top plateau commanding a widespread view of the north Connaught plain.  The scale of the site suggests it was a regional centre at the end of the Bronze Age – but more importantly it is home to the Fairies of the region, and is well respected and revered as such.  On a wintry night you can almost hear the cry of the Banshee…
All these Historical monuments can be accessed by tour or by car just ask us when booking how we can help you or assist you in booking such a tour.